The Man who moved the World

The Man who moved the World

In context with this man who moved the world article, think back, was there anything special about 1993 – May 24th to be precise? 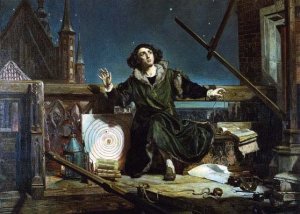 Well yes the World Wide Web was getting underway by 1993, but I’m thinking of an older, and easily as important a moment for celebration.

Let me tell you that it was a moment that probably went unnoticed by most of us.

It marked the 450th year since the publication of Polish astronomer, Nicolaus Copernicus‘, treatise, the Book of the Revolutions of The Heavenly Spheres.

The book was published in 1543 on May 24th. As you may know or discover, the date also marks Copernicus’ death.

You may say that that’s just another historical fact to remember. Well yes, you are right in some respects, but let me tell you that this book laid out a radical theory that moved the Earth.

Within the context of human history stretching back thousands of years, at least 7,000 years on a social and cultural level, back to what we call the Neolithic period; and then many thousands of years before that living out tribal and nomadic lifestyles – our hunter-gatherer existence. Within that huge amount of time we have only known the Earth goes around the Sun for 470 plus years.

Is this incredible or what? I think so. 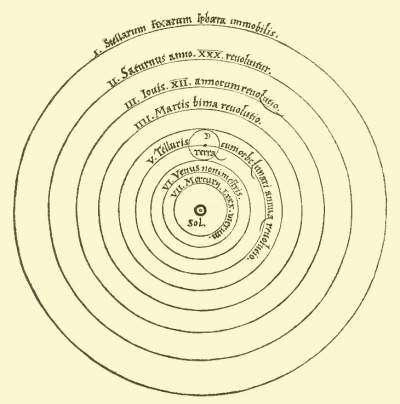 Did I say 470 years; well actually it has been a lot less time for the great majority of us to come to accept this theory as fact… [ The Man who moved the World ]

If you think about it, it is hardly surprising. I mean, come on, we are expected to believe we are all on a ball or sphere (instead of something flat) that is supposed to be turning and also moving through space! We don’t see or feel this happening. What woo woo magic is this? [ The Man who moved the World ]

It’s got to be rubbish – right!? Wouldn’t we all fall off, wouldn’t the wind generated by the movement be knocking us and our buildings over, wouldn’t the seas be constantly tidal?

This could be a likely response to something so outlandish a theory today, let alone back then. [ The Man who moved the World ]

Opposed by Church and science

The established Church and sciences of the time opposed it. Well the idea was indeed too incredulous to be believed to begin with.

Fortunately for Copernicus, the story goes he died on the same day as he received an advanced copy of his book – by then he was eighty (born in Thorn, Poland 19th February 1473). I say ‘fortunately’ because it appears he organised it so as not to be hanging around for the reaction.**

You’re playing with fire my Sun!

Copernicus in all innocence had developed his elegant theory while endeavouring to make sense of the weird gymnastics that the planets were being forced to perform. They had to go backwards or retrograde, then forwards again, in odd little circles, in order to fit in with the Earth being static right at the centre of it all. [ The Man who moved the World ]

We can imagine how exciting yet immediately dangerous this revelation must have been to him. Copernicus well knew the likelihood of ridicule for his discovery and he is thought to have sat on his theory for decades.

He is reputed to have feared public opinion, even more so the opinion of fellow astronomers of his discoveries, and this is the reason often given by historians why he did not allow his findings to be published until 1543, when he knew he was going to die.

But let’s make no mistake about this, Copernicus’ real fear lay with the status quo, the Church and its reaction to his theory. The book is actually dedicated to the Pope of the time, Pope Paul III, presumably to help ameliorate the political impact, or maybe a trusting that it would be viewed more favourably with the good intention that lay behind it.

Copernicus, being a church canon, had studied the philosophy of Aristotle and the astronomy of Ptolemy, in context with Church law – at the Catholic school in Krakow, Poland – and had sworn to the oath of obedience.

He, more than most, would have been aware of the danger he placed himself in if his radical ideas ever got taken seriously. There was after all a lot at stake for the Church to keep things as they were.

These were uncertain times for the Church, and not least following the challenges from the likes of Martin Luther (1483-1546) and John Calvin (1509-1564). Both Luther and Calvin challenged Church teachings and were leading figures in the Protestant Reformation against the Church – out of which arose the Protestant Church.

The hard liners of the Church more than ever had a political investment in maintaining everything status quo, and so the notion of the Earth being at the centre of God’s creation, the centre of the universe was intrinsic in maintaining this. In the hierarchy of things, this continued perception retained the Church in an obvious central position of power, above kings and queens, as the ordained authority over the lives of people. [ The Man who moved the World ]

Take that away and all hell could break loose.

So tampering with matters threatening the hierarchy was dangerous for anyone, particularly by a god fearing man of the cloth. And this is one who would become a traitor of the worst kind, and who, we can suspect, being a devout Catholic, would have every reason to fear he was going straight to hell for his outrageous heresy. It was risky all around.

Obstacles in the path of the truth

Today we all, or most of us, understand we go around the Sun, not it around us, but back then it was so radical and yet true that it serves as a huge reminder that sometimes what appears to be explained as obvious and irrefutable can be later found to be incorrect, misleading and not at all representative of what is really going on.

It serves too as a reminder that often the path to the truth of a matter is fraught with obstacles, some natural and some erected by others, sometimes out of honest misunderstanding but sometimes out of ulterior design to protect the interests of the powerful.

Those Greeks got in there first

To be fair, Copernicus was not the first to suggest the Sun was at the centre of things.

That honour goes to a remarkable Greek astronomer, called Aristarcus (310–c. 230bce), some seventeen hundred years earlier – and it was an earlier Greek, Heraclides Ponticus (387–312bce) who proposed the Earth rotates on its axis. [ The Man who moved the World ]

But Aristarcus and Heraclides likewise must have faced similar ridicule or disbelief in their time as they were up against the big gun of Aristotle (384-322bce). They had less clout, and so it was Aristotle’s fixed Earth, at the centre of the cosmos, that was carried through to mediaeval times – historically endorsed through Claudius Ptolemy’s astronomical book, the Almagest (circa 100ce).

Support for Copernicus from radicals and free thinkers

Following Copernicus death and publication, some notable people such as the astrologer, John Dee, and astronomer, Johannes Kepler, came to the support of his theory.

I’ve read he also received some support within the Church itself – from Jesuit quarters. Slowly his system began to gain some credibility with the more radical and free thinking people of the time.

It is worth noting though that some ninety years on and Copernicus’ solar argument remained no more than ‘unsubstantiated’ (what a wonderful catch-all word so modern in its usage), a theory which people could take or leave – with most preferring the latter.

But then Galileo Galilei (1564-1642), using his amazing invention – the telescope – came along and helped to alter public opinion when he found evidence for Copernicus’ new arrangement by observing the four moons going around Jupiter – and therefore evidence that not everything was orbiting the Earth.

He came out in bold support for Copernicus – and poor guy, we know where that got him with the Inquisition. The cat was out of the bag though and wouldn’t go back in. [ The Man who moved the World ]

Well, here’s to your radical theory Copernicus – you are a star act and we difinitely buy it now.

*Note, the above article is extracted from a forthcoming book by the author.
**I’ve often wondered if the term ‘cop out’ originates from Copernicus’ planned cop out.

The Ultimate Beginner’s Guide to Astronomy
If you want to find out more about astronomy, and getting out to look at the stars, this is a useful article to check out – full of good info and advice.
A Tour of the Moon
The Overview Effect
All along the Watchtower