An astrological overview of where we are

‘There must be some kind of way out of here’, said the joker to the thief, ‘There’s too much confusion, I can’t get no relief…’ [ All along the Watchtower ]

Update: Check out Ukraine under Uranus Pluto skies. Also Astrology and global unrest for links with this article.

If we look around, all along the watchtower, one can’t help but notice that we are all (well it seems like ‘all’ to me) going through a really testing time globally right now.

There is some kind of dramatic change, upheaval and at times downright nastiness going on – whether we are talking recession, natural disasters, actions by extremists, corruption or war mongering, there is a lot happening.

Not that it is all bad

Some of us are feeling more emancipated, finding our feet, breaking with more traditional constructs on who we are and what we want from life. [ All along the Watchtower ]

I’m particularly impressed by people who are breaking the bounds of what can and can’t be done in context with gravity – scaling great heights freestyle, base jumping, extreme snowboarding and ski jumping. 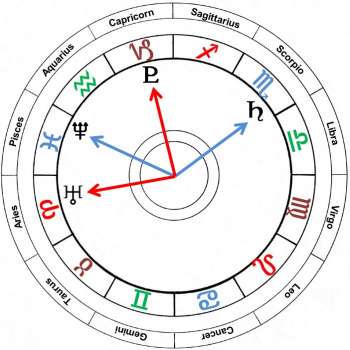 Trying to make sense of it all though is not so easy.

Looking at each area or event separately as it arises is helpful, and in negative circumstances necessary to resolve matters, but that in itself doesn’t give us an overview, a global understanding of what is happening, what direction things are going in.

Astrology (oops! I know, I know some people find this a dirty word, an expletive even, but hear me out) does provide an overview, a sense, a trend, a theme of what is going on.

A year ago I wrote an article for another website and then eventually placed it on this website – called Astrology and global unrest. In the piece I discussed the trends of Uranus and Pluto* going on for four years. It is the tension between these planets and what they symbolise that is the main driver for what we are dealing with in these times and I believe it would really help people to better understand and deal with our situation by understanding this theme.

The reason I’ve decided to mention this right now, again, is because these two are exact square to each other around the latter part of May and then late October, early November this year – the dates are almost of little relevance as they move slowly and will tend to colour the whole year – and for that matter next year, and going on into 2015. [ All along the Watchtower ]

Uranus represents change, bringing on the new through insight and sudden and dramatic upheaval. I think you’d agree that no one likes change that much – we do tend to be creatures of habit.

But that goes with our need to find that rock to build our lives on, so there ain’t much wrong with it – unless we are heading in the wrong direction or seeking to take unfair advantage of building on the rocks of others trust, their misfortune or unhappiness.

Uranus is also moving through Aries which puts an emphasis on a ‘me’ approach to life – ‘me doing my own thing’, which can have consequences for and against. The important thing here however is the giving birth to something new. By the way Uranus resides in Aries until March 2019.

Then there’s Pluto, Pluto can strike fear in the heart. It symbolises ‘truth’ often in uncompromised fashion. It clears out the deadwood and, where we are living a lie, particularly a spiritual lie, it will expose that lie often in dangerous circumstances. [ All along the Watchtower ]

You know the saying from Matthew, ‘If your right eye leads you astray…’ Well, if it does lead you astray, Pluto will be your surgeon! But that can mean it is being done for the right reasons.

Pluto continues to trundle through Capricorn – a sign of power, the status quo, old order, authority, the corporate body, governing bodies. And Pluto will continue moving through Capricorn until November 2024.

The fact that these planets are also square to each other in the sky raises the temperature and the likelihood of jerky, slip, stick movement – yes, just like tectonic plate movement, with stuff pouring out to the surface – the magma of our lives.

To add, the plutonian theme is further emphasised with Saturn now going through Scorpio and bringing light to the dark and shadowy stuff. Skeletons in the cupboard, issues thought buried and forgotten now re-emerging.

I’ve also included Neptune is this arrangement – Saturn and Neptune are in a loose trine – 120 degrees from each other – and that’s healthy.

Symbolically here Neptune increases the uncertainty we can all feel but it also allows for dissolution and forgiveness, unconditional love, healing, the return of the spiritual, applying rich imagination and bringing in the arts, especially music, as a way forward.

Neptune is in Pisces, the fishes, a theme often associated with the Christ. It rules Pisces and therefore doubles up its value here. This is the direction for going forward and redressing the balance.

All along the watchtower

These guys, Uranus and Pluto, are what I would call the Cosmic Cleaners and no one messes with them. No doubt you can identify, better than I, the events of them working at the coal face in your neck of the woods. Of course we see it going on in the global recession, in Syria, Afghanistan, in posturing of North Korea, in extremist actions going on around the world.

Here in the UK we’ve had some big outpourings such as the phone tapping and issues with freedom of the press. There are issues with many unnecessary deaths in the NHS, there’s the Jimmy Savile fiasco, with arrests still taking place, and issues around Catholic priests and children. Old wounds emerging, of children being abused, is near rife in the UK at least at this time.

One event abroad that has really struck a Uranus/Pluto chord for me is the eight story building collapse that has just happened in Savar, Dhaka, Bangladesh.

This building was a poorly made structure with three floors added on top illegally.

The people working in it had flagged up the dangers of how unsafe it was. I thought I heard on the BBC news that workers had left the building and were ordered to go back inside a short while before it collapsed – killing well over three hundred and fifty people. The building collapsed on Wednesday after police ordered evacuation on Tuesday:

Police say they ordered an evacuation of the building on Tuesday after cracks in Rana Plaza were found, but the factories ignored the order and were operating when it collapsed the next day.

Video [footage] before the collapse shows cracks in walls, with apparent attempts at repair. It also shows columns missing chunks of concrete and police talking to building operators.

Never mind about Health & Safety, here was a situation where people were placed second to greed and profits. People running the factory have been arrested for this. But this stuff goes on we know it does. Some of us are not learning.

So what does it all boil down to? I think you know the story already but I’ll have a go at it. In the round it is like this: These planets are best understood and worked with when what they symbolise is incorporated into a collective direction.

Unless we begin to look at our lives and take stock of the fact that we are not just here, as Kurt Vonnegut would have us believe, ‘to fart around’ (I did smile when I first read that), nor to keep taking from, and abusing, each other – and our planet.

Unless we begin to accept that we are here as one family, that we need to respect each other’s birth-right, that we are here to raise the consciousness of ourselves and treat everything around us with respect and care, to become more loving beings.

Unless we begin to become more thoughtful, more giving; then this situation will only continue to get churned up, and it doesn’t take astrology to predict it will probably continue to get worse – until we get it right.

I will add, without wishing to offend anyone, that I believe we will in the long run have to change, even demolish some of the mythologies, beliefs and doctrines of our orthodox religions. I’d include the non-spiritual religion of orthodox science in that mix too.

All this in order to get where we need to go. Some of us have already outgrown these doctrines through our own volition, but in doing so we have increasingly been in danger of throwing the spiritual baby out with the bathwater – and yes, then heading in the wrong direction. We have to review and renew our spiritual purpose on the good ship Earth, and get back on track. And an ‘Amen’ to that!

Well, that’s my rant finished for today – you have a good one too.

Read Astrology and global unrest for a bit more take on this.

*Okay I know Pluto is no longer considered to be a ‘planet’ but it remains a hugely important symbol in astrology.

The writer has been involved with the study and application of astrology for over 35 years. He has diplomas in the subject from the Faculty of Astrological Studies (UK) and the Mayo School of Astrology (UK).