It’s a fair assumption that there is no planet akin to “our home” — this beautiful, awesome and extraordinary blue gem — for light years in any direction.

And, just as extraordinary, very probably there is no lifeform akin to ourselves for the same distance…  Some might say, ‘Thank God for that!’ — well okay, given the time we are taking to wake up to our actual situation and the responsibilities we have.  But, it might be argued, the fact that we are awakening at all is truly remarkable in itself! The text: A Simple Prayer for all who sail on the Good Ship Earth

I pray for us, my brothers and sisters around the Earth. I pray that all of us may link more closely with each other, undoing the darkness and fears, and spiritual ignorance that have so divided us.[ Good Ship Earth Prayer ]

Becoming more awake, more loving, more understanding beings. More fogiving of our past. More embracing of each other and of our planet the Earth; and of the plants, animals and creatures that travel with us, upon the good ship Earth. May peace and peace and peace be everywhere.

Synchronicity or the channeling of an archetypal goddess – you decide! 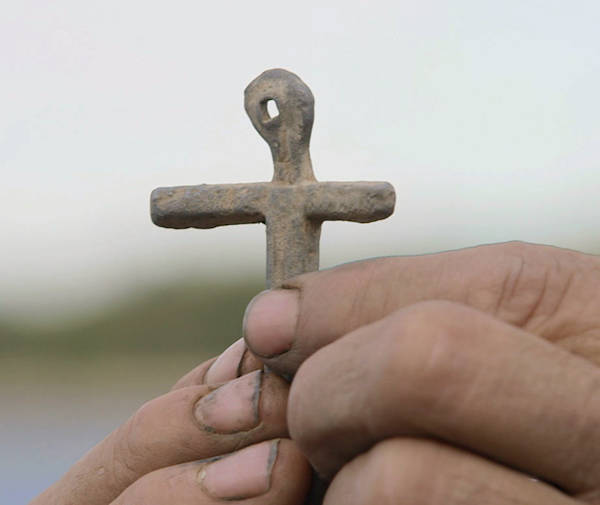 When back in 2016 I was inspired to write and arrange the Good Ship Earth Prayer into the shape you see here, I had no idea that I was invoking the ancient goddess Tanit in the way that I had placed the text and the title I gave to it.

As I well remember, the form took on its own shape from the natural breaks in the text written. I was pleased that with having the image of the Earth, as the head, the resulting triangular form took on a figure that was female in appearance, with arms outstretched.

I only learned of Tanit when watching a repeat of the TV show, The Curse of Oak Island, just today (29 July 2020 on Blaze – I’ve just begun to take interest in the show).

The team had requested an expert to share her findings on the Knights Templar lead cross (thought to be a Christian cross in origin) that was found on the island. The expert indicated that what it represents may be traced back to 1200 BC and Phoenician in origin.

The Oak Island Cross looks Christian in form but she thought it is a later version of a cross associated with Tanit. It wasn’t until she began describing Tanit that my ears began to really prick up. She said (which I have now also seen on the Web), Tanit was most often displayed with a circular head, outstretched arms and a triangular body.

I saw the immediate link with the form I had given to the prayer. But there was more…

While the guys on Oak Island were in raptures over her assessment of their cross, I was having a Eureka moment over what I had unknowingly constructed out of a simple prayer.