Astrology Reports from Some Inspiration

Looking for some clarity on who you are, your life, and where you are heading over the year ahead!?

Is this for you?

Choose from the following links:

About Some Inspiration Astrological Reports

These products are provided under Some Inspiration Publications.

The reports are produced by Francis O’Neill. Francis has been a practicing astrologer for 40 years. His work has involved giving private readings, talks, and writing about the subject – see articles below. He has diplomas in astrology (DMSAsrol; DFAstrolS) with both the Faculty of Astrological Studies (diploma with distinction) and the Mayo School of Astrology. Both organisations are based in the UK. [ Astrology Reports from Some Inspiration ]

Anyone seen a genuine UFO

Has anyone seen a genuine UFO? What was it like?
(Quora question)

Yes I have seen UFOs on more than one occasion. Here’s one that took place in Leicestershire UK – before Chinese lanterns and drones became the explanation. [ Anyone seen a genuine UFO ]

Back in September 1966, around 10pm, I was in a back garden of a friend’s house. It was a beautifully clear night and our location, behind a row of terraced houses, meant that we didn’t have a lot of ambient streetlight to contend with. It was pretty dark. [ Anyone seen a genuine UFO ]

I don’t know what made me look up at that particular stretch of sky when I did, but as I did I noticed a light, a steady light, like a star, that was moving slowly against the background stars. It caught my attention. I guess it must have been thousands of feet up.

Initially I thought it was a satellite, Telstar even, but even if it had been, it was a rare sight to see, and it gave me a buzz of excitement.

But next another moving light appeared and was joining the first. So now there were two moving lights, like stars, going in the same direction, but also appearing to be slowing to a stop.

They did stop. I was joined by my friend at this point and we kept watching.

Suddenly a third light came hurtling across the sky, seemingly out of nowhere but appearing from the same direction as the other two. It looked, for all intents and purposes, that the two had stopped to wait for the third to catch up.

All three then went gently off together across the sky in a southerly direction towards Leicester.

No planes could do what they were doing – and without any sound reaching the ground. We had no obvious explanation for it.[ Anyone seen a genuine UFO ]

Seen by other witnesses and reported – in Leicester

It turns out too that we weren’t the only people to notice these lights. A small piece appeared in the local Leicester Mercury about it. An account given in the LUFOIN Register (of The Leicestershire UFO Research Society), runs as follows:

3 blue circular aerial objects were observed that hovered for 20 minutes before drifting away. Three blue coloured circular objects were seen in the sky over Leicester, by two male witnesses while repairing a street lamp by the side of the road. [The] objects passed overhead and hovered for twenty minutes until [they] drifted away one after the other.

I only discovered this report recently. The objects we saw didn’t appear so much “blue” as I recall but the rest of the description fits well. Bear in mind this was well before Chinese lanterns and drones.

One of my other experiences was very nearly an encounter of the third kind… I’m keeping that for a book I’m writing. [ Anyone seen a genuine UFO ] 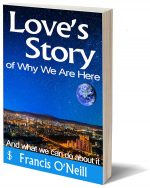 Both these stories can now be found in, Love’s Story of Why We Are Here. If interested, find out more about the book, off this link.

Do you believe UFOs exist?
Are we alone in the Universe?
Alien life here now